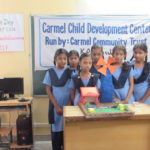 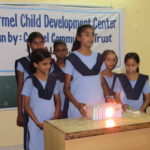 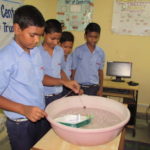 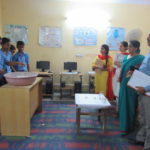 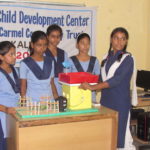 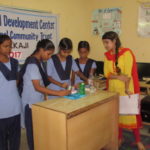 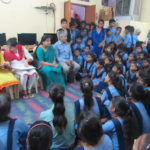 In honour of former President A.P.J. Abdul Kalam, an exhibition on the theme ‘Recycle the Waste Products’ was held in the Carmel Child development center (T.A-1 Kalka ji) for the very first time in the remembrance of the 11th Indian President APJ Abdul Kalam. It was a great opportunity for children to learn to be more creative and how they can recycle the waste products.

This year children from CCDC learnt how the resources we have on Earth—all the raw materials and an awful lot of the energy are limited: once we’ve used them up, we won’t get any more. So it makes sense to use things as wisely as we can. They understood the best way to use Earth’s resources more sensibly is to reduce the amount of things that we use. For example, less packaging on food in shops) and to reuse things instead of throwing them away (reusing carrier bags at the grocery store makes a lot of sense.

When we throw stuff away, you might be very glad to get rid of it: into the trash it goes, never to be seen again! Unfortunately, that’s not the end of the story. Usually they go off to be bulldozed underground in a landfill or burnt in an incinerator. Landfills can be horribly polluting. They look awful, they stink, they take up space that could be used for better things, and they sometimes create toxic soil and water pollution that can kill fish in our rivers and seas.

If everyone reduced, reused, and recycled, we could make Earth’s resources go an awful lot further. Recycling saves materials, reduces the need to landfill and incinerate, cuts down pollution, and helps to make the environment more attractive. It also creates jobs, because recycling things takes a bit more effort than making new things.

Moral: Throwing things away is a bad habit; recycling them is a good habit. Recycling isn’t all that difficult: it’s simply a matter of changing your habit.